The theme of the meeting was ‘CRIS in the Information Landscape: The place and role of CRIS to support and manage Open Data, Open Access, and Open Science ‘. Apart from this central theme, a national session was organised by AMUE, giving the attendees an excellent overview of the developments in France in the field of Current Research Information. In the traditional Jostein Hauge session euroCRIS members presented other interesting developments.

The meeting was attended by 67 persons, 14 of them were new euroCRIS-members. As a special service to our members, the presentations were made available in the euroCRIS repository at http://dspacecris.eurocris.org/cris/events/events00920 very soon after this successful meeting. 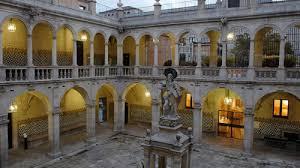 A new tradition was born. Just like in 2014, euroCRIS organised a Strategic Membership Meeting. The meeting was organised in Barcelona in collaboration with the Consorci de Serveis Universitair de Catalunya (CSUC) and the Institut d’Estudis Catalans (Institute for Catalan Stu

dies, IEC). The last organisation was also the host for the meeting that was held from 9 to 11 November 2015.

The Strategic Membership Meeting (SMM) is meant to strengthen the relationships with our Strategic Partners. Besides, the meeting is an opportunity to discuss the euroCRIS (strategic) policy with strategic partners, with a direct involvement of our members. The theme for this meeting was “International collaboration on research information management and CERIF”.

The National Session had a focus on the research information landscape in Catalonia.

All papers and posters presented at the Strategic Membership Meeting in Barcelona in November 2015 have been made available in the euroCRIS DSpace-CRIS repository.

In this second SMM - attended by 88 persons, 15 of them new to the euroCRIS community -  lively debates were held with both our Strategic Partners and our Members. Very promising developments are the SELRIM-initiative (the South European Link for Research Information Management) and the relationships established with IBICT (Instituto Brasileiro de Informação em Ciência e Tecnologia). The final conclusion of this SMM was that we need identifiers, standardisation, and a common exchange format to realise optimal interoperability.

PASTEUR4OA (www.pasteur4oa.eu) supports the aim of encouraging the development of matching policies on open access and open data in the European Union according to the European Commission’s Recommendation on “Access to and preservation of scientific information” (July 2012) and in view of maximizing alignment with the Horizon 2020 policy on access to the research funded by the Commission.

In 2015, the focus of PASTEUR4OA was on the creation of advocacy resources and om the organisation of regional workshops for research funders and performers. euroCRIS was mostly involved in dissemination tasks.

Started in 2015, HOLA CLOUD (www.holacloud.eu) aims to establish effective mechanisms for efficient collaboration among the members of the software, services and Cloud computing community. In the first year of this project, the euroCRIS-team participated both in the first annual conference (called ‘CLOUD FORWARD 2015’) and in the set-up of the HOLA CLOUD Platform. Former euroCRIS President Keith Jeffery chaired and established the International Scientific Committee for ‘CLOUD FORWARD 2015’ and co-organised the conference tracks. Besides he was the co-author of a position paper in the preparation of the HOLA CLOUD roadmap for cloud computing developments in Europe.

Important role for euroCRIS was the explanation of CERIF to its partners in the project, in particular to Linknovate, the organisation responsible for the HOLA CLOUD Platform implementation. Sources of data were analysed and their data formats were mapped to CERIF in order to populate the Platform.

A deliverable was written to describe the metadata model. Finally, contributions were made to other Platform-related deliverables.

In its last year, HOLA CLOUD will organise a second conference and the associated redaction of the Roadmap. Furthermore, it will be engaged in the enrichment of data and functionality of the Platform and it will set-up a sustainability and exploitation plan.

The VRE4EIC [Europe-wide Interoperable Virtual Research Environment to Empower Multidisciplinary Research Communities and Accelerate Innovation and Collaboration, www.vre4eic.eu/] project develops a reference architecture and prototypes to be used for future VREs including building blocks that can be used to improve existing VREs.

The project started October 2015 with a kick-off meeting at the CNR-premises in Rome. During this meeting the Work Package leaders in this project presented their plans. The first activities were mostly related to the elicitation of the requirements.

euroCRIS is the leader of the Work Package related to interoperability, metadata and research contextualisation, during which mappings of several formats to and from CERIF are expected and wished to be standardised to allow for – amongst other things - interoperability between e-Research Infrastructures around datasets and software services. Keith Jeffery - representing ERCIM but still closely linked with euroCRIS - is scientific coordinator.

The goal of this internal euroCRIS-project is to provide a reference system able to reliably check and confirm CERIF compatibility of CERIF-CRIS software platforms and of individual operational CERIF-CRIS systems. This implied the realisation of an operational reference database with remote access for development purposes. CC-REFIM will be the reference implementation of the CERIF-API.

The CERIF REST API specification version 1.0 has been published in August 2015 and is available in the euroCRIS repository (http://hdl.handle.net/11366/398).  With this API, third party software programs may access and reuse data maintained in CRIS-systems. The API has two positive effects. It promotes the interoperability of CRIS-systems and their content and it enables the further development of applications, services and components to encourage the access and reuse of data in a unified way.

Snowball Metrics is a project started up to enable benchmarking by driving quality and efficiency across higher education’s research and enterprise activities, regardless of system and supplier. The project is a collaboration between Elsevier, UK, euroCRIS and universities from the UK, USA, and Australia. Within the project, metrics have been defined. The aspiration is for these metrics to become global standards that enable institutional benchmarking, and to cover the entire spectrum of research activities.

In Paris, Keith Jeffery co-chaired a session on connecting data policies, standards and databases in the life sciences and a meeting on Data Fabrics in addition to co-chairing (with Rebecca Koskela of DataONE in the US) the major metadata group open meeting where a set of canonical metadata elements was discussed, receiving wide support. Unsurprisingly the ‘elements’ bear a close resemblance to CERIF

The worlds or the repositories and these of the CRIS-system are converging. Both organisations see also an important role for CASRAI (see below). euroCRIS has reacted on the COAR Roadmap ‘Future Directions for Repository Interoperability’. euroCRIS sees this Roadmap as a strong base for a further strengthening of our relationships.

Together with ORCID, CASRAI organised an outreach conference in Barcelona, in May. Michele Mennielli was a member of the programme committee. David Baker presented the data exchange standards.

In October CASRAI organised its Reconnect-15 Conference in Toronto. Anna Clements presented a paper on Snowball Metrics and David Baker chaired a workshop on the reduction of research administration workload. The both of them were co-chairs of a workshop on the CASRAI-methodology.

ORCID, http://orcid.org  is an open, non-profit, community-based effort to provide a registry of unique researcher identifiers and a transparent method of linking research activities and outputs to these identifiers. Our collaboration has led to the result that the ORCID API is now serving up CERIF-XML.

ISNI, the International Standard Name Identifier, is administered by OCLC. In CRIS-systems it is important to know which organisations, programmes and projects are described and how that may be identified. ISNI plays a crucial role in this respect. This year the contacts with ISNI/OCLC have been formalised and intensified. Concrete progress is expected to be seen in 2016.

In 2015 further improvements have been implemented. As from 2015, CINECA will host the euroCRIS website. The website underwent a total make-over. Older items have been archived, so that members see in principle only the actual information. With CINECA discussions have started to renew the members’ administration. The euroCRIS repository is also hosted by CINECA. Instead of a newsletter, actual news is upload directly onto the website (simultaneously, a tweet on a news item is spread).

End of 2014 Board Elections were held. As a result, as from January 1, 2015 the euroCRIS Board has the following composition:

New in the Board are the members Pascale Blancquaert, Dimitris Karaiskos, Michele Mennielli and Mark Cox.

Barbara Eberts, treasurer in 2024, too found a new interesting job. Because she is no longer directly involved in CRIS-systems, she made the decision to resign late 2014. Barbara did an excellent job in modernising the financial structure of our organisation. With Pascale Blancquaert – who has expertise in the financing of European projects – we have found a worthy successor.

Because of the increase in complexity of the relationship euroCRIS is dealing with, the Board has decided to reshuffle many of the other positions. We now have both an executive for strategy (Anna Clements) and an executive for External Relations. Michele Mennielli – new in the Board – holds this position. Michele is very active in CINECA and has an extensive network.

The importance of the project activities becomes bigger and bigger. Therefore, the board has decided to change Valérie Brasse’s function as task group leader into the function ‘executive for projects’. This change underlines the crucial role projects play in the euroCRIS community.

Miguel-Angel Sicilia accepted the function as executive for academic affairs. In this position he is responsible for the exchange of information between euroCRIS and Academia.

Nikos Houssos, former leader of the Task Group CRIS Architecture & Development, had to resign in relation to a change in position. For many years Nikos has been our expert in the development and implementation of CRIS systems. Besides he was our linking pin with OpenAIRE. In this role he was one of the persons responsible for the realisation of the OpenAIRE Guidelines for CRIS managers. Luckily, Dimitris Karaiskos – an EKT colleague – was elected, so that we can continue to rely on the expertise available in Athens.

Danica Zendulkova has become the leader for the new combined TG BP/DRIS.  The former TG Linked Open Data is now part of the TG Indicators. Marx Cox is the new leader of this TG. Finally, Pablo de Castro took over Danica’s position as leader of the TG CRIS-IR.

The Executive for Projects (Valérie Brasse) was involved in activities related to projects such as the recruitment of team members for HOLA CLOUD starting in January 2015 and for VRE4EIC starting in October 2015. While the process for such recruitment has been going smoothly, the administrative organisation for members to execute European Projects for euroCRIS has been revisited for VRE4EIC. As for previous years, proposals (6) were prepared and submitted, with no success unfortunately, although one was on the reserve list. Mapping CERIF to and from other standards being a recurrent activity in the projects, the need to list and standardise such mappings has been identified and will be carried out in 2016. Regarding the internal CC-REFIM project, another few steps were accomplished in 2015, building the basis for a future online CERIF compliance testing.

The Board met in 2015 in The Hague on 4 February at DANS. Further Board Meetings were held on 13 May (Paris) and 12 November (Barcelona). Virtual executives Board Members were held on 23 January, 27 March, 14 April, 4 September and 7 December.

An internal audit was performed on 30 June in The Hague. In the members’ business meeting in Barcelona on 10 November the financial report on the year 2014 and the budget for 2015 were presented to the members and approved.

EC projects has been separately documented and archived. The Board discussed the possibilities of the development of a sponsorship and donations policy.

In 2016 euroCRIS will intensify its collaboration with institutions in South America. In July a euroCRIS delegation will visit IBICT (in Brasil) to realise a CERIF-based research information system. The Brazilian example may be the influence the research information infrastructure in other Latin American countries. The CRIS2016 conference will be organised in St Andrews in June, whereas the Strategic Membership Meeting will be held in Athens in November.